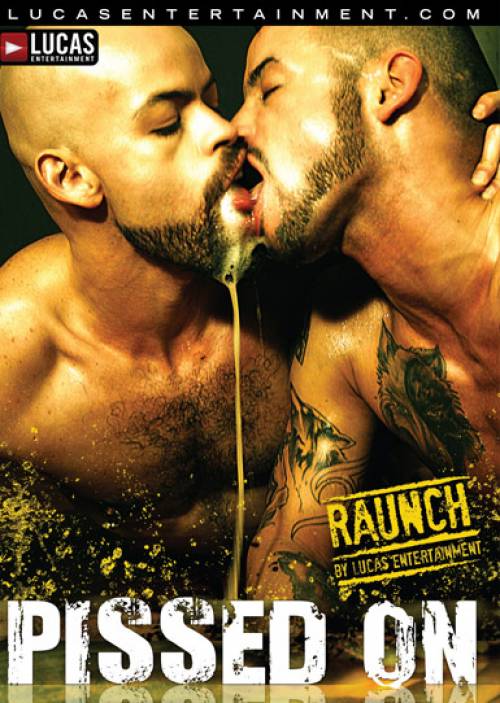 SCENE 4
Studly Sluts Kennedy Carter and Salvatore Dolce Screw
from Pissed On
on 07.13.11

French fuck-pig Glenn Coste loves warm and wet piss-play. This tattooed twink stands only at 5'1 but can take a tall glass of urine any day. I love muscled and tattooed guys, says Coste. I enjoy having sex in anyplace that I can. Glenn Coste's favorite movie is The Bodyguard and thus his favorite singer is Whitney Houston.

Thick uncut Brazilian Harry Louis is a sex-expert who loves to share his skills on screen. Why shouldn't he? With his meaty 9-inch cock, Harry Louis is an aggressive top who knows how to fill a hungry bottom. Other than sex Louis enjoys cooking and going to the theatre. His favorite movie is The Hours and his celebrity crush is none other than our very own Michael Lucas.

Tattooed pig-bottom Kennedy Carter shows off his passive skills in his Lucas Entertainment debut Pissed On! Kennedy Carter is a London native who has a lustful craving for older men. I like guys in their 30's and 40's, says Carter. I also like muscled, hairy Latino guys with beards and tattoos. This red-haired sex expert loves the feeling of being pressed up against a big sweaty guy! And according to his celebrity crush, Kennedy Carter's idea man is none other than Ricky Martin.

Filthy fucker Manuel Rokko loves to play dirty. With a pierced nipple and shaved head Manuel Rokko knows how to explore his raunchy side. This furry kink-king lives for watersports and loves versatile play wherever he can get it. Manuel Rokko's hobbies include: dancing, traveling, reading, skating and of course sex! His favorite type of food is Japanese and his favorite types of men are fit, muscular and hairy!

Bubble-butt piss pig Max Duran knows how to play dirty with the best of them. This uncut Spanish native was born in raised in Almeria, where he still resides today. Although Max Duran loves to explore his kinky side, he is a romantic at heart. Max's favorite part of sex is kissing and he describes himself as traditional when it comes to relationships. Max Duran's celebrity crush is Brad Pit and he loves pop music from Lady GaGa and Rihanna.

Dark and smooth Nubius makes his Lucas Entertainment debut in the piss-play Raunch title Pissed On! This muscled and meaty stud takes his full lips and wraps them around Michael Lucas' infamous cock! But Nubius has his own long and thick dick to show of in the film. Not to mention his round bubble-butt that is ready to be pounded!

Italian born, muscle-god Salvatore Dolce works his thick uncut meat in Lucas Entertainment's Pissed On! Salvatore Dolce is a hairy trimmed dominant top whose favorite part of sex is eating ass. This athletic sport stud loves guys with shaved heads and is turned on by shorter men. Salvatore Dolce lives in London and works in the fashion industry.

Slurping on Manuel Rokkoï¿½s hot Latin uncut cock, tattooed French boy Glenn Coste is pleasantly surprised when he gets supersoaked with a humongous stream of shimmering piss! Drenched all over his face, he drowns in Manuelï¿½s juices and continues to open up wide to take whatever Manuel can dish straight into his throat. Manuel in turn drops to his knees to have his own fun with Glennï¿½s shower of piss, blowing him and sucking in every drop he can. The two wrestle on a hardwood floor and Rokko forces Glenn to lap up a puddle straight from the floor, splashing him in the shallow pool while holding his head down.

Inside a king-sized shower, Rafael Alencar bathes Joseph Mercier and Jonathan Agassi in his own special stream, straight from his uncut monster dick! Jonathan and Joseph lap up Rafaelï¿½s piss stream with a parched thirst, smearing their lips across every crevice of his built, muscular, Brazilian frame. Not one to come up short in any situation, Rafael continues erupting with urine like a fountain statue as the two boys play in their new yellow bath. Soon Joseph joins in on the pee play and Jonathan Agassi is happy to soak it all in, once again proving himself to be the new king of raunch!

Never getting enough raunch in his life, Jonathan Agassi drops to his knees and pisses into his own mouth like a filthy champion, He sucks on Rafael Carrerasï¿½s mammoth monster cock and Rafael pauses to piss into Jonathanï¿½s thirsty mouth. The two Lucas Entertainment studs piss into a wine glass and bathe in its contents without any hesitation! If there was ever any doubt that one canï¿½t swim in a manï¿½s urine in style, this scene will undoubtedly prove it wrong.

Back in the ï¿½goldenï¿½ shower, Jonathan Agassi douses Rio Silver in a stream of urine, and takes some of Rioï¿½s piss into his own mouth. They spit it back and forth, makeout style, until they are joined by a Harry Louis for a soaking wet threeway!