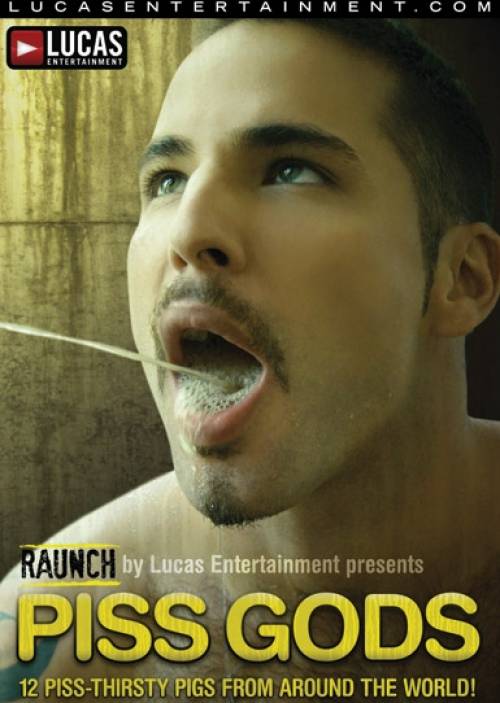 SCENE 1
Fooling Around in Piss: Jonathan Agassi and Martin Passoli
from Piss Gods
on 06.24.11

Jones was born in Buenos Aires and now lives in Barcelona. This masculine stud is self-proclaimed 100% gay and loves photography and sports. What gets the tip dripping for him is sexy men who love to be versatile. Jones has a mischievous side and gets off on exploring sex is unexpected places and has even given a good pounding on a public bus. Bruno has a thick tool and a round meaty ass so where would you like him to give it to you?

Brazilian born masculine seducer Carlos Caballero joins the cast INSIDE ISRAEL. This multilingual rugged stud speaks Spanish, Portuguese, Catalan and Englishso feel free to say â€˜fuck me' any way you like. Although he was born in Brazil, Carlos is full-blooded Spanish and lives in Barcelona. Just talking to him for one moment you see that he has an incredible allure and charm. He has a pulsating sex drive and loves to explore his sensual and aggressive side. Caballero can be bent over to take it just how you want but he usually ends up on top with his thick fuck-stick and loves to suck a nice ass. What turns him on is Italian food and a nice guy in bed who has no boundaries and an open mind to where he and his partner can take it So what do you have in mind for him?

Guy has always dreamed of being a model, and shows off all his talents in MEN OF ISRAEL! The horsehung lanky stud loves to pound ass fast and hard, especially if his partner is cute and beautiful. He practices constantly, after all it's good for his health

Lavi Yacov is a dark, handsome Israeli power top! With a huge monster cock like that, why wouldn't he be? Nothing comes close to seeing Lavi use his powerfully hung rod to plunge a twink's tight hole, something he definitely enjoys. Check out his interview with Michael Lucas and scene partner Sebastian Ritz below!

Max Schutler is a try anything, energetic, full of life and cumkind of guy. This multi-lingual, Argentinean aggressor has a nice uncut dick and hot round ass that likes to take it rough! Q. What inspired you to start modeling? A. Watching porn and all the hot guys in the movies, I thought I want to do that!! Q. What is your preferred sexual position? What is your favorite sexual activity? A. I don't care about position top or bottom, doggy style or missionary it always depends on your partner and on the mood... but if I'm going to get fucked, it has to be really hard!! And if I going to Top someone I will do it hard too!! ;)

Menash is a nasty pig slut who gets pissed on by Carlos Caballero in Piss Gods. A veteran of the Israeli army, he also lists a tank as the wildest place he's ever had sex.

Young fuck pup Ron makes his Lucas debut in PISS GODS. He loves getting fucked and his bottoming skills will leave you breathless!

Sasha Dov puts his rugged masculine physique to good use in the Jordan River by taking a mouthful of both Bruno Jones' and Jay Roberts' thick cocks. This chiseled statue of a man takes perfect form for INSIDE ISRAEL and he does not leave one drop of a man left behind.

European sex gods Baptiste Bremont and Martin Passoli get soaking wet in this electrifying shower sceneâ€¦a shower of PISS, that is! Crouched dutifully in an immaculately white basin, Martin canâ€™t help but stroke himself as he bathes in the relentless stream coming from Baptisteâ€™s enormous cock. Splish-splashing everywhereâ€”across Martinâ€™s eyes, nose, lips, and chestâ€”Baptisteâ€™s undying urge to erupt with liquid is truly awe-inspiring. Once the stream is up, Martin unleashes his hungry mouth on Baptisteâ€™s dirty pole like a pro.

Outside we find hairy Lucas Entertainment exclusive Jonathan Agassi on his knees facing the hulking Bruno Jones. Before a breathtaking sunset, Bruno shoots a jet of steaming refuse straight into Jonathanâ€™s mouth like a magnum water pistol. Gargling the golden solution audibly before spitting and swallowing it up, Jonathan demonstrates his thirst for Bruno beautifully. Heâ€™s sure to catch all supplemental squirts in his mouth before hungrily slurping on Brunoâ€™s shaft. Before he can take it any longer, Jonathan erupts in his own vertical volcano of piss!

A simple gloryhole becomes a receptacle for Spaniard Carlos Caballeroâ€™s hot stream of piss, beneath which the obliging Israeli Menashe Ben-David reclines. Bathing in the golden shower, Menashe takes it into his mouth and spits it out decadently. He then wraps his lips around Caballeroâ€™s pumping rod until the wall comes down and he hungrily devours the monster face to face. Soon the two hunks are unleashing torrents of urine all over Menasheâ€™s torso, and this pee play leads to a whole lot more in a climactic fuck scene where Carlos dominates Menashe and punishes him with his wet, piss-soaked cock.
SEX SCENE #2: Jonathan Agassi & Martin Passoli

When Jonathan Agassi pours a foamy beer over his skyward-pointed schlong, it is merely a prelude to the wet and wild antics that inevitably follow. Teaming up with the sculpted and cocksure Sasha Dov, Agassi erects his legs into the air and allows his latest partner to spit and spew the remaining contents of the bottle into his waiting hole. Not one to be easily satisfied, Sasha proceeds to insert the bottle into the smooth, dripping pucker, and then follows with a lengthy piss session into the bottom boyâ€™s thirsty mouth. The piss guzzling evolves into a hot 69 adventure, at which point Jonathan turns the dominator into the dominated by pounding him with his rock hard rod. In a poetic final act, Jonathan creams Sasha across the kisser, a sumptuous echo of their previous piss play.

â€œYou know what I want'â€ the insatiable Jonathan Agassi asks his newfound friend Lavi Yacov before answering his own question: â€œI WANT YOUR PISS.â€ The alert and obedient Lavi is more and ready to oblige Jonathanâ€™s request, and douses him in a golden bath of his held-in liquid until he nearly drowns in it! The filthy spattering of Laviâ€™s nonstop stream on the ceramic tile floor echoes so loudly itâ€™s a miracles the neighbors canâ€™t hear, and soon he unleashes his unforgiving deluge of piss across Jonathanâ€™s ass, his mouth, and down his gargling throat. Lavi spanks Jonathanâ€™s face with his outrageously fat tool, pre-cumming down his chest before cramming it up his moist and ready bubble. He penetrates the verbal bottom in a variety of positions and the two explode with cum across Agassiâ€™s face, throat, and chest.

Upon entering a torch-lit cave, you can expect to come across some type of secret ritual, and this scene with Michael Lucas and Max Schutler is no exception! Michael lets loose his steaming cascade across Maxâ€™s smooth and sculpted chest and teasingly spurts straight up his nose. Max can scarcely suppress his smiling as he receives the golden shower in this stunning interlude.

Sun-kissed Guy Ronen retreats to his private cabana in order to relieve himself upon the compliant and willing Ron Atias. Ron rubs himself down in Guyâ€™s delectable piss with enthusiasm before putting his mouth to work on his friendâ€™s sputtering hose. Soon Guy cannot take anymore and insists on turning Ron around and ramming his rod up his rookie ass. Ronâ€™s whimpers are the best accompaniment to Guyâ€™s powerful thrusts. These boys prove why pissing is the perfect prelude to a good old fashioned pummeling!