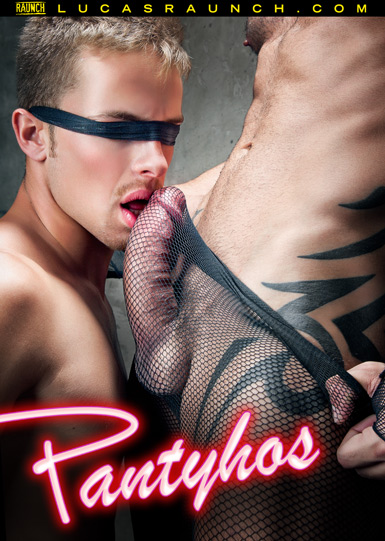 Even the most masculine of men want to be beautiful inside and out, and when Lucas Raunch’s sexiest guys give in to their own feminine wiles they turn into complete and utter “PantyHos”! Lucas Entertainment Exclusive Justin Cruise debuts in a sleek pair of stockings and seduces a lustful, sex-hungry Adam Killian. Christopher Daniels and Jeremy Stevens let go of their inhibitions by tearing their panties and stockings to shreds as they fuck each other. Vito Gallo and Mitchell Rock push their masculinity to the brink by wearing corsets and stockings during their deep-penetrating romp between the sheets. Aaron Blake slips into something more comfortable for Jimmy Durano, who shows the blond beauty the true meaning of “power top.” And Jessie Colter displays his stunning legs in a pair of fishnets before eagerly wrapping them around Jessy Ares. All of the “PantyHos” are ready to act like the true whores they really are!

SCENE 1
Jessie Colter Opens His Sexy Legs for Jessy Ares
from PantyHos
on 09.27.12

SCENE 2
Vito Gallo Pounds Mitchell Rock in a Corset
from PantyHos
on 10.04.12

SCENE 4
Christopher Daniels and Jeremy Stevens Fuck in Panties
from PantyHos
on 10.18.12

SCENE 5
Justin Cruise Slips into Stockings for Adam Killian
from PantyHos
on 06.27.13

Blond bottom twink Aaron Blake was born, raised, and still lives in Oklahoma, which is where he learned that he's completely gay and loves to have sex! When he's with another man, it's pure fucking that he loves more than anything else. His day job is at a software company, but his friends and some scouts talked him into showing off for the cameras! Thankfully he took their advice!