View All MoviesMen In Stockings 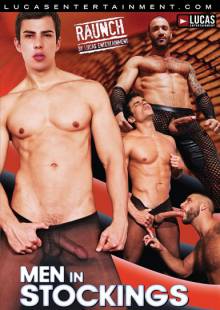 SCENE 1
Sexy Stockings with Boyfriends Spencer Reed and Phillip Aubrey
from Men In Stockings
on 05.04.10

SCENE 4
Maikel Cash and Leonardo Lujan Have Gay Sex in Stockings
from Men In Stockings
on 06.02.10

SCENE 5
Michael Lucas Turns Bruno Jones into His Whore
from Men In Stockings
on 06.12.10

SCENE 6
Rafael Carreras and Jonathan Agassi Fuck in Stockings
from Men In Stockings
on 06.21.10

Jones was born in Buenos Aires and now lives in Barcelona. This masculine stud is self-proclaimed 100% gay and loves photography and sports. What gets the tip dripping for him is sexy men who love to be versatile. Jones has a mischievous side and gets off on exploring sex is unexpected places and has even given a good pounding on a public bus. Bruno has a thick tool and a round meaty ass so where would you like him to give it to you?

Exhibitionist Marco Cruise loves to show off in front of guys. A self-professed bisexual, when he's going for the same sex he likes to go all the way... as a full-fledged power bottom! Check out Marco's insatiable ass in Lucas Entertainment's latest production, FUCK ME HARD!

25-year-old blond stud Phillip Aubrey is trained as a model and a dancer, so you can imagine how we have him putting those skills to use on screen! Paired with his real-life boyfriend Spencer Reed, Phillip made a stunning debut in Lucas's Fuck Me Hard! By now, the tattooed and tan Phillip is quickly ascending the ranks and becoming one of the most popular new faces (and asses) in gay adult entertainment! This North Carolina boy delivers powerful bottoming and versatile skills in every performance. Check out Phillip Aubrey's scenes now!

One of the hottest muscle tops at Lucas Entertainment is the stunning Spencer Reed. From the day Spencer Reed auditioned with Lucas, he was destined to become a star. His boyish charm paired with his hulking tattooed frame is reminiscent of a boy-next-door who grew up to be more of a man than anyone could have expected! As Spencer Reed progresses from one film to the next, it's provocative to see how eyes have become increasingly fixated on him as a breakout power top. Large, in charge, but never intimidating, it's always a pleasure (and more) to see what Spencer will stun us with next.

Spencer Reed strokes his pronounced erection through his sweatpants as his boyfriend, Phillip, gets dressed up in ladiesâ€™ tights. Spencer slurps Phillipâ€™s meat through the sheer stockings, before Phillip straddles him on a corner sofa, slapping Spencerâ€™s alert cock against his shaped up bubble. Spencer spanks Phillip and strokes his massive cock, then rips a hole through the material and fingers and spits on the boyâ€™s exposed hole. Soon heâ€™s pounding the blond bottomâ€™s newly exposed asshole, and Phillip bounces his butt off and on that big bone like the professional bitch that he is.

Michael Lucas makes out with tattooed muscle man Junior Stellano, whose meaty legs are stuffed into a pair of hot black tights. Junior deep throats Michaelâ€™s sturdy staff as Michael fingers the hungry bottomâ€™s excitable hole. Michael tears the tights open like a birthday gift, unwrapping Juniorâ€™s twitching cavity for serious playtime. Michael buries his cock into Juniorâ€™s buff, hairy ass and fucks him upside-down, sideways, and all around until he explodes in a gooey climax across his ripped chest! Lingerie has never looked so macho, in this stunning debut by Junior Stellano.