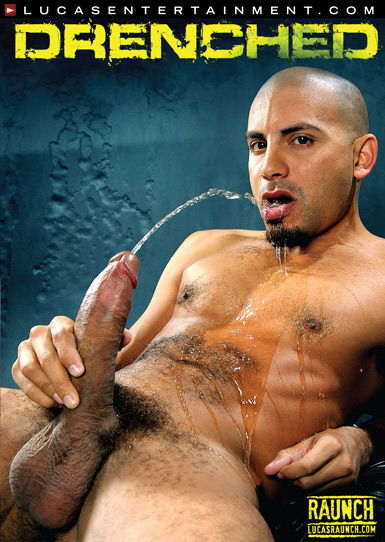 SCENE 2
Dominik Rider and Shane Frost Unleash Streams of Urine
from Drenched
on 03.08.12

SCENE 3
Parker London and Christopher Daniels Gag on Cock and Piss
from Drenched
on 03.15.12

Parker London is a big, burly, tattooed hunk of a guy, but don't mistake this all-American Virginia Beach native for being a power-top: Parker's favorite position is to get fucked on his back, and he loves getting rimmed! It's perfect for anyone who loves a sculpted, buff, succulent ass. A carpenter by trade, Parker says the craziest place he's ever had sex is in a church bathroom! While he loves to get it on in restrooms of all varieties, Parker still appreciates the connection that comes with a sexual encounter. His audition scene with Rusty Stevens proves that when it comes to connecting, Mr. London has no trouble tapping in!

When Shane Frost decided to become a gay adult performer there was only one thing motivating him: "Boys! Boys! Boys!" This New England-raised discovery likes to spend his time with a partner making out and fucking! How is that for a straight shooter? A fan of the beach, he'll spend his time there doing everything from hanging out, to listening to music, to... you guessed it... having hot sex on the sand! In his debut scene for Lucas Entertainment's Rush, we paired Shane up with Lucas Exclusive Avi Dar to see how the chemistry worked. You're going to have to see it for yourself to find out, but we can tell you that it's not at all disappointing!

"A technically great film with talented performers connecting continuously throughout as each unfolding scene sets a totally different tone. Preferences aside, this one is a definite keeper. Kudos! "