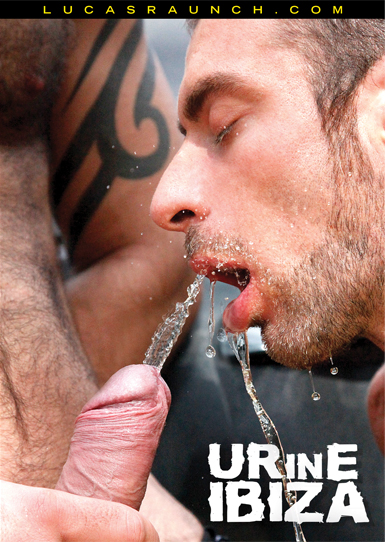 Get ready to be drenched and piss soaked because now URINE IBIZA! Ten thirsty pigs lap up warm man piss in their mouths and all over their hot and hard bodies. Muscle bottom Scott Carter takes power top Bruno Knight's thick dick and hot urine. Hispanic Raunch-fucker Lucio Saints pounds and drowns Ben Brown in streams of golden showers. Kink kings Jonathan Agassi and Jessie Colter fist and fuck with their feet and big dicks leading up to mouths full of piss and cum. Watersport-pros Rowen Bailey and Sam Barclay flood each other and then flip-fuck. Monster-hung Sean Xavier and stud wolf Drake Jaden get piss-wet and then slam each other’s asses with dicks and toys.

SCENE 4
Rowen Bailey and Sam Barclay Spray Piss and Flip-Fuck Each Other
from Urine Ibiza
on 01.26.12

SCENE 5
Sean Xavier and Drake Jaden Piss and Fuck Each Other with Toys
from Urine Ibiza
on 02.02.12

British pornstar Bruno Knight takes charge in every situation: he pulls over on the side of the road to take a piss, but instead of just relieving himself, he decides he's going to humiliate his passenger, Scott Carter, first. Scott gets out of the car and drops to his knees, waiting for Bruno to treat him like a urine whore. Bruno whips his dick out and starts shooting a stream -- Scott has his mouth open wide, begging for every last drop. Scott follows his yellow bath up with taking out his own dick: he's hard and Bruno slips the gay pornstar's uncut cock down his throat, sucking on and getting him excited before turning him around and eating his ass out. Bruno is anxious to fuck shortly after, and Scott doesn't stop him from slipping his hard dick up his ass. Both Bruno and Scott are big and muscular, and Bruno's powerful frame slamming into Scott's ass makes for a hot session of fucking. Afterwards Scott's own bladder pops: he shoots off a stream of piss at Bruno, who revels in the steaming shower. It gets Bruno so hot and hard that he slams Scott up against a tree and starts pissing on him and fucking his muscular hole deep until they both blow their white loads!

Lucio Saints is a gay pornstar wielding a big, fat uncut cock filled with piss and cum, and the only person who can take care of him is Ben Brown, a furry hunk with a cute face and burly body. Ben is hanging his head over the edge of a toilet as Lucio dominates him, holding his head and pissing all over his face. Lucio is an aggressive playmate -- after he pisses all over Ben, and dunks the stud's face in the toilet bowl, submerging him in a pond of piss. The torment excited Lucio, and the Spanish hunk isn't shy to use Ben any way he wants: he opens the British pornstar's throat up with his uncut cock, sliding it down Ben's throat until he chokes and gags. His punishment for not taking it all the way is being further drowned in the toilet! The two hot guys switch places and Ben squirts his piss all over Lucio, and opens his mouth up like a whore and takes it in. Ben can certainly piss away a storm -- at times it doesn't even look like he's going to stop unleashing his urine all over Lucio! When the guys are soaked and glistening, Ben presents his ass to Lucio, who first eats it out before fucking him deep. With all of Lucio's powerful thrusts, Ben pisses more -- and Lucio mouth is open and excited, taking it while his slams Ben's hole!

In a heated grunt, gay porn's favorite power-bottom Jessie Colter gives Lucas Entertainment exclusive Jonathan Agassi a direct order: “I want your piss in my mouth!” Jonathan does just that, squirting a heavy stream of piss directly at Jessie. Excited, Jessie delivers the same, hot and steaming river of urine on Jonathan as he's kneeling down before Jessie, mouth open and ready to slurp and even swallow! But the piss is foreplay as far as these two are concerned; after they're done with the initial debauchery, Jonathan starts working on Jessie's famous ass, getting it ready to mount. Jonathan hops on and starts riding Jessie like a beast -- the bottom moans, grunts, and howls like he never has before with each pounding thrust Jonathan delivers. To rinse off their sweat, these two hot guys get ready for round two of piss before Jonathan pulls Jessie into some really raunchy sex. First Jonathan wraps Jessie foot in a condom and takes a seat, and then Jonathan greases up his own fist. Like a magic trick, first we see Jonathan's fist, and then we don't. Jessie's face scrunches up in pleasure and pain as Jonathan works his hand into Jessie's rectum! There's even a surprise towards the end of a handing working its way into Jonathan -- but whose is it'

Nature calls in the great outdoors: smooth and lean lads Sam Barclay and Rowan Bailey are making out in the forest like two young, hot guys fucking around with each other for the first time. As they're kissing Roman starts to piss hot, heavy, and hard -- his stream spraying up all the way to his and Sam's mouth. The piss loosens them up for a heavy sucking session: Rowan opens up wide as Sam slides his fat boy-dick down Rowan's throat. But Sam notices that Rowan looks a bit parched, so he pisses in his mouth to moisten the kid up! Sam fixates on Rowan's ass after awhile, teasing and eating out his hole before slipping on a condom and mounting him. Rowan closes his eyes and throws his head back as Sam goes at him rough, fucking deep and with steady thrusts. Rowan leans back out of excitement and looses control, pissing all over the two of them while Sam is still buried inside of him! The two pornstars reverse roles, with Rowan eating out Sam before fucking him, showing the same passion and aggression as he mounts his ass. And what better to finish their filthy lust off with even more piss!

There's a lot to be admired about Lucas Entertainment's newest exclusive, Sean Xavier: he's got an adorable face, a ripped body, and a fat dick nearly the size of a fire hose. Thankfully, he can use his meaty tool as just that, which is why scruffy pup Drake Jaden is hanging out with Sean. The mocha sex star wastes no time letting loose a torrent of piss, and boy of the hot guys have their mouths open, ready to receive every last drop of the hot and yellow liquid. Its Drake's turn afterward, and he pisses all over Sean's face before they get hard and take turns sucking each others hard and wet cocks. Sean's curious about Drake's hole, and first he eats out with his slick tongue before breaking out the household appliances. Sean uses the ribbed handle (for his pleasure) of a toilet plunger, pumping him with steady and calculated thrusts, all with Drake helpless and open on his back! The plunger loosens Drake up for Sean's cock, which is nothing short of massive, but Drake grunts his way to pleasure as Sean fucks him. The boys are versatile, so Sean turns around while Drake inserts a bottle into his rectum; after awhile they loose control and start pissing all over each other again! Drake puts on a condom and mounts Sean, riding his ass: we catch some amazing shots of Drakes tight and clenched abs as he pumps his bottom black beauty! Sean finishes the fuck scene with his dick pumping up Drake's ass -- and even more piss, of course!