View All MoviesPush It Out 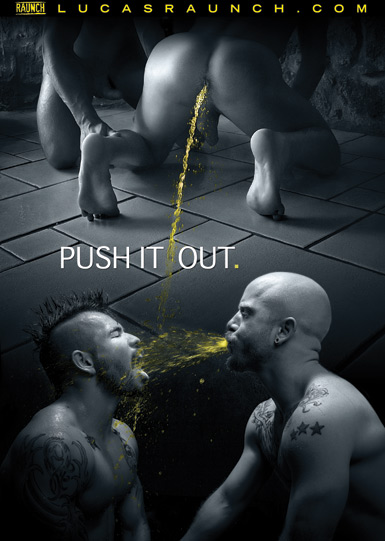 The filthy pigs of Lucas Raunch waste no time bending over, thrusting their asses high in the air, and puckering up their holes to “Push It Out”! Trenton Ducati begins by opening up Tate Ryder’s asshole with an enema rinse before fucking him deep. Edji Da Silva gives new meaning to nutrition when he sodomizes Jonathan Agassi with a banana. Draven Torres and Brock Rustin get soaked after playing their wet and wild watersports. Edji Da Silva makes a second appearance to get fucked for the first time on camera -- and a piss-soaked Tate Ryder has the honor! And Trenton Ducati returns to clean out Mathew Mason’s hole with gushes of water before pounding him out. Lucas Raunch’s hottest guys are giving their ass muscles plenty of exercise as they “Push It Out”!

SCENE 1
Tate Ryder Squirts Ass Water for Trenton Ducati
from Push It Out
on 08.16.12

SCENE 2
Edji Da Silva Stuffs Jonathan Agassi with Bananas
from Push It Out
on 08.23.12

SCENE 3
Draven Torres and Brock Rustin's Wild Watersports
from Push It Out
on 08.30.12

SCENE 5
Trenton Ducati Rinses Out Mathew Mason's Hole
from Push It Out
on 09.13.12

Jonathan Agassi is piss-soaked and hanged suspended after sunset. His captor is Edji Da Silva, who releases Jonathan after he's finished pissing on himself through his shorts. Edji takes Jonathan inside, where they both get even more soaked together: their bodies are glistening in fluid. Jonathan sucks Edji's dick and gets his hole eaten out before the Arab top fucks Jonathan in his own filth. But the guys take debauchery to a new level when they play around with their nutritional needs: Edji stuffs a banana up into Jonathan's ass and sodomizes him with it. How it stays together is anyone's guess!

Brock Rustin and Draven Torres make a great couple: they both have a similar build, but their features differ from one another. Brock is a ginger dude: he has a shaved head, but his goatee is all red and his skin is fair. Draven is Latino with dark skin and a wild Mohawk. It's noticeable both love their tattoos. Brock is the first to whip out his dick from his jockstrap and starts pissing on Draven. Their cocks let loose so much piss they are spouting like fire hydrants. Water coming out of one end isn't enough, so Brock and Draven bust out an enema bulb and fill each other up with water. The guys suck cock and flip-fuck one another along the way, and when Draven is specifically fucking Brock, the ginger bottom blasts out some enema water whenever Draven pulls out!

Edji Da Silva and Tate Ryder are both total pigs, and how they treat each other here leaves no questions about it! Tate and Edji douse each other in so much piss they look like they were both nearly drowned in a rainstorm. The boys are aggressive and hungry as they suck each other's cocks -- in between sucking they're lapping up piss off a glass coffee table and spitting it on one another. When it's time to fuck, Edji bottoms for the first time on camera: and it's difficult for him to say the least! He struggles to take Tate's cock inside him, but Tate also doesn't give him much choice until they flip around Edji starts fucking him!

Trenton Ducati uses his size to his advantage in the final scene of “Push It Out.” He's tall, lumbering, and muscular, and he outmatches Mathew Mason in every way. Trenton claims ownership over Mathew's hole and blasts floods of water into his rectum with his favorite enema bulb. Mathew can barely handle the pressure: he moans and yells with each insertion that Trenton makes into Mathew's ass. Mathew sucks on Trenton's cock after the first round of enema shots, but Trenton wants to sample his work so he bends Mathew over and eats him out. When Trenton decides to finally fuck Mathew he rams him without mercy… It's a good thing he's so clean!

"This talented cast never lets the action or its intensity flag for a moment during a long, riveting film that ends all too quickly. And, of course, technically perfect. There is no need for squeamishness, since it's all squeaky clean, considering. Raunch done right!"