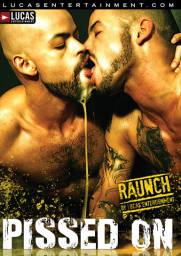 SCENE 4
Studly Sluts Kennedy Carter and Salvatore Dolce Screw
from Pissed On
on 07.13.11

Slurping on Manuel Rokkoï¿½s hot Latin uncut cock, tattooed French boy Glenn Coste is pleasantly surprised when he gets supersoaked with a humongous stream of shimmering piss! Drenched all over his face, he drowns in Manuelï¿½s juices and continues to open up wide to take whatever Manuel can dish straight into his throat. Manuel in turn drops to his knees to have his own fun with Glennï¿½s shower of piss, blowing him and sucking in every drop he can. The two wrestle on a hardwood floor and Rokko forces Glenn to lap up a puddle straight from the floor, splashing him in the shallow pool while holding his head down.

Inside a king-sized shower, Rafael Alencar bathes Joseph Mercier and Jonathan Agassi in his own special stream, straight from his uncut monster dick! Jonathan and Joseph lap up Rafaelï¿½s piss stream with a parched thirst, smearing their lips across every crevice of his built, muscular, Brazilian frame. Not one to come up short in any situation, Rafael continues erupting with urine like a fountain statue as the two boys play in their new yellow bath. Soon Joseph joins in on the pee play and Jonathan Agassi is happy to soak it all in, once again proving himself to be the new king of raunch!

Never getting enough raunch in his life, Jonathan Agassi drops to his knees and pisses into his own mouth like a filthy champion, He sucks on Rafael Carrerasï¿½s mammoth monster cock and Rafael pauses to piss into Jonathanï¿½s thirsty mouth. The two Lucas Entertainment studs piss into a wine glass and bathe in its contents without any hesitation! If there was ever any doubt that one canï¿½t swim in a manï¿½s urine in style, this scene will undoubtedly prove it wrong.

Back in the ï¿½goldenï¿½ shower, Jonathan Agassi douses Rio Silver in a stream of urine, and takes some of Rioï¿½s piss into his own mouth. They spit it back and forth, makeout style, until they are joined by a Harry Louis for a soaking wet threeway!