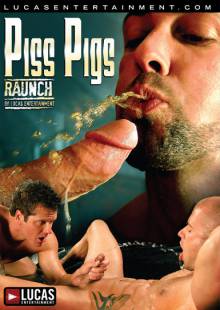 SCENE 3
Piss Play with Patrick Logan and Johnny Angel
from Piss Pigs
on 07.06.11

SCENE 5
Antonio Biaggi and Kayl O'Riley Fist and Fuck
from Piss Pigs
on 07.08.11

Rod Daily can scarcely pull his cock out of his tight, white Calvins without erupting into a relieving stream of hot piss--straight into Parker London's gaping mouth! He showers Parker's face like a tattooed Roman fountain, letting out a crisp fart in the process. Parker, feeling suitably filthy, decides to stand up and re-pay the favor, spewing a gushing stream of yellow pee right down Rod's parched throat. Rod gets on all fours to slurp on Parker's dripping-wet rod, before bending him over to insert a corkscrew buttplug into his tight asshole. Rod wrings out his soaking wet underwear into Parker's mouth and then fucks him like a big, buff bitch. The two splash around in their self-made puddle sucking dick, fucking, and pissing at the same time! Parker fucks the cum out of Rod in a stunning climax of wet and wild proportions!

Hairy muscle pup Mike Dreyden pisses a shimmering fountain across his chiseled torso and licks every drop off of his fingers, foreshadowing one of the filthiest piss scenes Lucas Entertainment has seen! In this scene from Piss Pigs, the hung Antonio Biaggi puts his monster dick to a decidedly wetter use than normal, urinating torrents onto the piss-parched Dreyden and his hot tattooed muscle god friend, Alessio Romero. Mike takes his turn drowning his buddies and the three launch into a jerk-off pissing contest that ends up with Mike on his back, getting a foul fingering in the splashy puddle they've just made. Finally Alessio mounts Mike, and Antonio gets on top of Alessio, for a 3-way fuck chain that's so soaked it may as well be under the sea! They fuck like sailors upon an ocean of yellow, before climaxing with a hot and raunchy snowballing scene that no piss pig ought to miss!

Johnny Angel has met a fitting match in the lanky Patrick Logan. From their buzzed haircuts to their tattooed bodies, it's like seeing double in this raunchy hardcore scene. Patrick quickly descends on Johnny's rock hard dick, taking him into his moist and accommodating mouth. He slurps Johnny's hose until it erupts with a burst of pee, inundating Patrick's mouth, face, chest, and body with bitter yellow discharge. Johnny takes a trip down Patrick's pelvis to indulge in some sucking and swallowing of his own, and Patrick obliges him with a splashy piss bath. Johnny aptly labels Patrick as a pig and a slut, and proves his accusations by fucking him like a bucking bronco!