View All MoviesPiss On Me 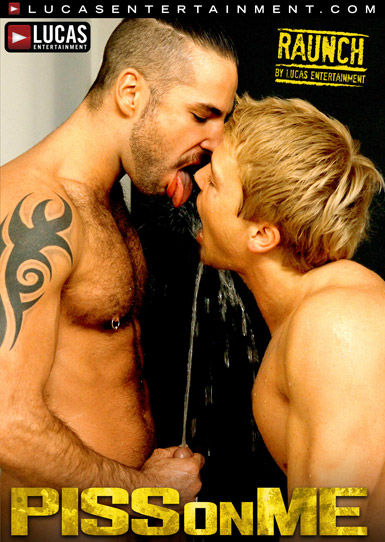 SCENE 1
Piss King Jonathan Agassi Humiliates Carsten Andersson
from Piss On Me
on 07.26.11

SCENE 2
Antonio Biaggi Slams Piss Pig Ramon Rinaldi
from Piss On Me
on 07.27.11

SCENE 3
Alessio Romero Controls Piss Bitch RJ Alexander
from Piss On Me
on 07.28.11

SCENE 4
Steven Daigle Goes Full Stream with Conner Habib
from Piss On Me
on 07.29.11

SCENE 5
Michael Lucas Pisses Endless Streams on Carsten Andersson
from Piss On Me
on 07.30.11

It's a torrential downpour of piss right off the bat as tattooed piss freak Jonathan Agassi lets a steady stream of piss rain down on gorgeous blonde Carsten Andersson all the way from the other end of the couch. The supply of piss seems endless as they piss on each other and themselves. Neither one of these vocal piss pigs can get enough warm liquid flowing onto their hot bodies or into their greedy mouths. After Carsten gets Jonathan's hot, cut prick in his mouth, Jonathan wrings all the piss from his filthy jockstrap into Carsten's pink hole. Jonathan fucks Carsten into a frenzy, filling his condom with piss until it bursts all over Carsten's face. The piss continues to flow freely until Jonathan lowers his tight hole onto Carsten's thick, uncut cock and rides his voraciously. Jonathan covers them both in more warm piss while Carsten is deep inside him and then shoots his creamy load right onto Carsten's waiting tongue. Carsten then blows his wad on Jonathan's furry stomach and laps it up before Jonathan bathes him in piss one more time, driving Carsten to cum a second time.

After some intense making out, stud pup RJ Alexander gets on his knees to choke down tattooed sex god Alessio Romero's thick cock. Alessio unleashes a torrential stream of piss, filling RJ's mouth and drenching him from head to toe. RJ lets loose of his own pee downpour directly into Alessio's mouth. Alessio takes it in and spits it right back onto RJ before ingesting RJ's hot dick. RJ falls onto his hands and knees so that Alessio can rip through his white briefs and eat his eager ass, slurping up piss and spitting it in. Alessio removes his jock strap and soaks it in piss so that he can wring it out above RJ's thirsty mouth. More of Alessio's pee rains down into RJ's mouth and hole before Alessio finally fucks RJ's ass deep. RJ fucks himself vigorously on Alessio's rock hard pole, both of them glistening with piss. Alessio hammers away at RJ's meaty ass, both of them grunting like the piss pigs they are. RJ flips onto his back and Alessio fucks the cum right out of him before coating him in a final layer of warm urine and hot cum. RJ tops it off with one more jet-stream of piss.

Steven Daigle is mopping up the set when Conner Habib comes in and admits that he likes it dirty. Lucky for him, it gets down and dirty quickly as Steven pulls out his dick and drenches Conner with a steady stream of hot piss. Conner wrings out what's left from his soaked wifebeater onto Steven before giving Steven mouthfuls of his urine and leaving his glistening all over. Steven then feasts on Conners's fat prick and sweet ass before dunking his head into the mopwater and filling his hole with his rock hard cock. Steven finds even more piss to let loose of and Conner is more than happy to take it in and spit it right back into Steven's face before bending him over and giving his ass a relentless fucking. They both are holding onto a seemingly endless supply of pee. They let it rain down on each other and are very vocal about how much they want more. When Conner can't hold it back any longer, Conner shoots his load all over Steven's face and stuffs his drained cock into Steven's mouth while he jerks himself, spilling his seed onto his stomach before hungrily taking a taste.

Blonde German stud Carsten Anderson lies in the tub waiting to be showered in Michael Lucas' warm piss. Michael has plenty to give, filling Carsten's open mouth with pee before Carsten pisses all over himself. Michael lets Carsten take just a bit of his huge, uncut cock into his mouth at first, giving him more piss before giving him more cock. While Michael stands over him, stroking his dick, Carsten lies back down in the tub and shoots an impressive load. Watching Michael jerking his massive cock is enough to make Carsten come a second time. As a reward, Michael gives him another mouthful of urine, leaving his face beaded with piss, before they share a kiss.