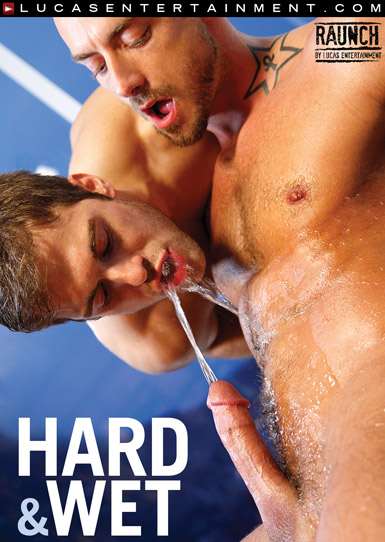 SCENE 2
Carsten Andersson and Ryan Russell Get Drenched
from HARD & WET
on 08.18.11

SCENE 4
Kinky Jessy Karson and Johnny Oliver Get Raunchy
from HARD & WET
on 09.29.11

The devilish duo begins with torrents of piss; Jessie is on his knees as Gabriel pulls down his jockstrap and lets loose his hot, golden stream. Jessie loves piss in the mouth, and he loves spitting it back onto Gabriel even more! They switch spots, putting Jessie on top, showering Gabriel's handsome face with a river of filth.

The highlight of the scene explodes on the screen when Jessie hops on Gabriel's dick and rides him to completion, all with continuous showers of piss while they fuck!

Blond hottie Carsten Andersson has the face and body of a pretty boy, but the heart of a piggish slut. He teams up with Ryan Russell, and from the beginning Ryan lets the piss pour out of him, spilling all over Carsten. They continuously reverse roles: Carsten and Ryan pull down their tight jockstraps, piss, and suck each other's stiff cocks, all the while rolling around in their own bodily fluids like animals.

The pair pulls down their jockstraps and starts spraying arches of golden, heated piss from the onset. Manuel is a meaty statue standing over Jonathan, who takes all of his partner's urine with a gleefully open mouth. But because Jonathan is the original piss god, Manuel submits his ass to him: Jonathan fucks and pounds Manuel's beefy, fuzzy cheeks (which are dripping and damp). They even take pause so Jonathan can insert a small, metal funnel into Manuel's asshole, filling the bear-turned-bottom with his steaming nectar!

Smooth bad-boy Jessy Karson whips out his huge, uncut cock and turns it into a fire hose of urine, all in an effort to impress his fuck-buddy, the sexy and bearish Johnny Oliver. Though Jessy is a top, he's more than willing to submit to the strong physique of Johnny: after his shower of piss, he aggressively sucks off Johnny's erect dick (which is studded with a Prince Albert piercing). Johnny returns the favor, pissing on and sucking off Jessy.

"*** Highly, Highly Recommended *** They don't get much harder or wetter than the opening pisser in 'Hard & Wet.'"

"It's amazing how well these talented performers sustain such riveting action through every frame. Each pair contrasts or complements beautifully and differently, leaving the viewer very nicely on edge during the entire well-focused film. Perhaps sleeper Montreal sits atop a seething, bubbling volcano. Many of these attractive guys did."